My fellow Americans. I cannot tell you what I do not know. It looks like the CIA likes to keeps tabs on everything I say by keeping me out of the loop. I am the President. I can't waste my time spinning. I delegate and take nice, long, warm baths. Ignorance is bliss but I do read the papers. I know that Osama binladen died on Bush's watch, but that was not acceptable. The man was sick and the Bush Administration needed to keep the hunt alive so that we could adequately protect the world from terrorists like Sadaam Hussein.

By now, you ought to understand the process. We manufacture, share and spread weapons of mass deception (not to mention Tanks and Self-propelled Guns, Artillery, Armored Personnel Carriers, Surface-to-air Missiles, Armored Cars, Guided Missiles, Surface-to-surface Missiles, etc. etc. etc...) We are in a State of Denial because it is simply the only plausible course of conduct. Get it? If we repeat the same lie over and over and over again, we don't need a smoking gun. We just say we dumped the body at sea and celebrate the death of Osama binladen. Simple. It's like a post-dated letter that took 10 years to get delivered. It's about time, don't you think?

We now know that Bush could not have possibly announced the death of Binladen. Clearly, Iraq had sucked the oxygen out of the opportunity to celebrate the death of a terrorist. Sadaam Hussein, the man that Bush Sr., had failed to kill, was Bush Jr's obsession -nothing else mattered, which is fine with me because I get all the credit for the death of Osama binladen.

Get with the program people. We rally the people to rally the international community, to invade our enemies. Why do you think we are bombing Libya, today?

In the future, I promise to tell you everything I know and I expect you to put everything else in the papers. Thank you and good night (keep it short Charlie, it's time for my warm bath.)

All joking aside, to be very blunt and very serious, the war in Iraq was about sending a larger message that was not about to be stopped or sidetracked by the "mission accomplished" death of Osama BinLaden, and that is the simple truth.

"Courage is not the absence of fear, but rather the judgment that something else is more important than one's fear. The timid presume it is lack of fear that allows the brave to act when the timid do not. But to take action when one is not afraid is easy. To refrain when afraid is also easy. To take action regardless of fear is brave." — Ambrose Hollingworth Redmoon, from No Peaceful Warriors!

Next: Thank God, Osama was dead, or they'd call me another Jimmy Carter ! 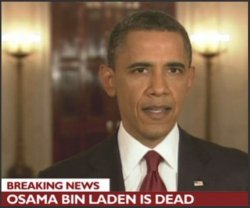