SIRHAN SIRHAN AND THE 30TH ANNIVERSARY OF THE

The assassination of Senator Robert F. Kennedy shortly after midnight on June 5, 1968, changed the course of world history. Senator Kennedy had promised to end the war in Vietnam if elected as President, as seemed likely to happen following his victory in the June 4 California Democratic Presidential primary election.

At first glance, the RFK case seems open and shut. After all, Sirhan Sirhan was arrested with a gun in hand at the scene. There the simplicity ends, however. There is an abundance of evidence which refutes the official version of this crime.

1. Sirhan was out of position and out of range and therefore could not have shot Robert Kennedy. The Senator was shot from behind, but all witnesses place Sirhan in front of him in a face-to-face position. All witnesses placed Sirhan's gun at between 1.5 and 5 feet from Senator Kennedy, but the autopsy findings clearly establish that the Senator was shot from a weapon held somewhere between less than 1 inch and no more than three inches away. All witnesses describe Sirhan's gun as having been held horizontally in a normal standing position, but the autopsy report describes all bullet tracks in Senator Kennedy's body as angled sharply upward, as though fired from below.

2. An armed security guard with strong anti-Kennedy views admitted that he was standing directly in contact with the Senator to the rear, that he dropped down when the shooting began and that he then pulled his gun. One witness ignored by police claimed he saw the guard fire. The guard's weapon was never checked. Meanwhile, the one person who photographed the assassination, Jamie Scott Enyart, was tackled and arrested at gun point. His camera was seized by police, and his photographs have never been recovered. Los Angeles Police secretly burned 2,410 assassination-related photographs in a county hospital incinerator long beforeSirhan's trial. A Los Angeles jury later awarded Enyart a substantial verdict for the loss of his photographs.

3. The official autopsy report devastates the prosecution theory that Sirhan shot Robert Kennedy. However, prosecutors illegally withheld this critical document from defense counsel for four months until after the defense had unnecessarily conceded Sirhan's identity as the killer during opening statements to the jury.

4. Bullet holes in a door frame at the crime scene which are documented in FBI photographs show that more bullets were fired than could have come from "Sirhan's" gun. The police never disclosed these bullets, even though their removal by LAPD criminalists was observed by other police personnel. The door frame in question was then destroyed under color of a court order issued immediately after Sirhan's trial without notice to the defense.

5. Police switched bullets in order to fabricate evidence lending apparent support to their theory of the case. As has been noted by Sirhan case researcher Rose Lynn Mangan, Los Angeles police manufactured a comparison photomicrograph using substitute victim bullets and then falsely presented this photograph as evidencing a match between the bullet removed from Senator Kennedy's neck and a test bullet fired from "Sirhan's" gun. The use of substitute bullets in this exhibit ("Special Exhibit 10") is clear from the fact that identifying markings on the bases of the involved bullets differ from those recorded by physicians when the bullets were recovered.

6. Police behaved as though two guns were recovered at the crime scene, because they fired two revolvers and obtained test bullets from both weapons. The second gun had been in LAPD custody before the assassination. Despite police denials, official records confirm that this gun was destroyed by the LAPD long before Sirhan's trial.

7. Dr. Herbert Spiegel, a New York psychiatrist who teaches at Columbia University and who is widely regarded as among this country's leading experts on hypnosis, has concluded that Sirhan was probably acting out hypnotic commands when he fired a gun in Senator Kennedy's presence that fateful day. Sirhan himself was so disoriented following his arrest that he did not even know he had yet to be arraigned. During pre-trial psychiatric examinations in his cell, Sirhan proved to be the ideal hypnotic subject, climbing the bars without knowing that he was carrying out post-hypnotic commands. Expert trial testimony established that notebook passages containing repetitions of the phrase "RFK Must Die" were written in a hypnotic trance, and Sirhan spontaneously reproduced this phrase under hypnosis when asked in his cell for a description of the Senator. Sirhan's amnesia about the crime was unshaken by hypnosis and has consistently remained intact.

These and other issues of Constitutional dimension are currently before the California Supreme Court, which is considering a habeas corpus petition seeking an evidentiary hearing and a new trial for Sirhan. Meanwhile, this historic crime remains unsolved. Its true perpetrators have never been brought to justice. One victim was killed, and five others were wounded. The seventh victim of this dastardly plot, Sirhan Sirhan, has been confined for thirty years for a crime he did not commit.

THE KILLING FIELDS: In 1969, Charles Manson gathered a group of impressionable men and women and convinced them to murder upper-class people and to try to frame the Black Panthers. The assassinations of the 1960's demanded scapegoats and ugly people who cultivated them.

ACCOMPLISES: The evening of the murder of Senator Robert F. Kennedy, police interviewed Vincent DiPierro, a college kid and part-time waiter at the Ambassador Hotel, who said he had spotted Sirhan Sirhan before the shooting, standing near the tray table. What had drawn his attention to the would-be assassin was the woman to whom he was whispering. DiPierro thought she was quite attractive, despite a small pug nose. She had brown hair and blue eyes and wore a "white dress with black or purple polka dots". Moments before Sirhan leaped forward to shoot, he murmured in her ear and she smiled.

That same night at the police station a 21-year-old campaign worker named Sandra Serrano also told the investigators about a mysterious polka dot-wearing lady. Having gone out for some fresh air, Serrano found sanctuary on the steps that led down from the ballroom to the street. At about 11:30 p.m., she said, a trio comprised of a young couple and a young male who looked like Sirhan Sirhan ascended the steps from the parking lot and entered the ballroom. The woman wore a polka-dot dress. Not long after, claimed Serrano, the couple, minus the third party, came bolting down the steps, exuberantly crying, "We shot Kennedy!" When the police asked her for a more accurate description of the dress and the woman who wore it, the witness replied, "white dress with polka dots (and she had) a funny nose."

That wasn’t all. The polka-dot lady had also been seen by a police sergeant named Paul Sharaga. He had been cruising on-duty near the vicinity of the Ambassador when he heard a radio report about a shooting at the hotel. Turning his squad in that direction, he parked it in the adjacent lot and ran inside. But as he reached the sidewalk outside, already in clamor, he overheard a giggling couple pass by him, mumbling, "We shot Kennedy!" The female wore polka dots. By the time it dawned on him what was going on, they had disappeared into the darkness. Sharaga immediately radioed their description into headquarters.

The eyes and the nose are unforgettable. 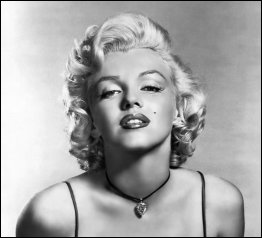